Time to break the rules

While I was at my sickest, I had various 'rules' that I needed to follow. These rules were set by my anorexia and I felt as though I had absolutely no choice but to follow them. 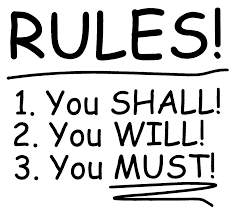 I was not allowed to eat until it was meal time. Eating even just a minute before 'meal time,' no matter how hungry I was, just wasnt allowed. I felt as though eating before the right time would be a sign of weakness, like I wasnt strong enough to resist the temptation of food. Now however I only use meal times as a guide. If I am particularly hungry I may eat half an hour earlier and sometimes I have no choice to be more flexible with meal times while I am at work. 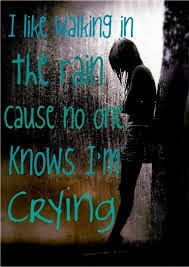 I had to exercise for the right amount of time (the amount changed throughout my illness) every single day no matter what. If it was pooring with rain or freezing cold I would still go for my walk. Skipping my walk simply wasnt an option. I would even get up and go at 5am if I needed to go somewhere else that day where I wouldnt be able to walk just so I could get it done.

I even had rules for doing chores around the house. Instead of taking the wheelbarrow out to the wood heap to fill it up with fire wood, I would leave the wheel barrow at our back door and walk each individual piece of wood from the wood heap to the wheelbarrow (about 50 metres away). Not following this rule was simply not an option as it would mean I was failing to make the most of every opportunity I had to exercise, which would mean I was lazy.

Similarily when taking washing off of the washing line I wasnt allowed to have anymore then one item of clothing in my hand at any one time. I would leave the laundry basket a little distance away so that I would have to make a seperate trip from the clothes line to the basket with each item. I can assure you that this certainly isnt the way I do things now. I am always in such a hurry as I always have so much to do that I just grab as many items as I can and bundle them straight into the basket.

Breakfast had to be my biggest meal of the day as I believed it would kickstart my metabolism and I wasnt allowed to eat anything after 6pm as I wouldnt have a chance to burn it off while sleeping. I had to drink at atleast 1 full glass of water with each meal at an attempt to fill me up as well as keep my metabolism running high (as water is needed for you to metabolise food and energy). If I was ever cooking in the kitchen or preparing meals I was not allowed to sit down, no matter how exhausted I was feeling. I knew that you butnt more calories standing and therefore felt incredibly guilty for sitting down.

I had to stick to my calorie goal for the day (which changed depending on what stage of my eating disorder I was at). At times this was as little as 100 calories while at others it was 1000 calories or even 1600. If I worked out my daily calories were even 2 calories more then they should have been, I would eat less at one of my meals to make up for it. Of course eating less then my daily calorie allowance was acceptable, it was just eating any more than the daily limit that wasn't allowed.

As well as a calorie limit I also had a macronutrient limit. I remember at one stage not being allowed to eat anymore than 5g of fat per day. Anyone who knows about macronutrients would know that this is practically nothing. At the time I was living on fruit, vegetables, tinned spaghetti, crumpets and jam/vegemite. I also bought fat free yoghurt and low fat rice pudding that I was 'allowed' eat. Even once I increased my calorie intake significantly I still needed to avoid fat at all costs and always chose fat free products. 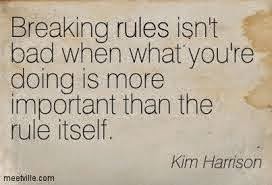 As a perfectionist and also an anxiuos person, I have always been frightened of breaking the rules as I always wanted to do the 'right thing'. Luckily however I realised that the rules my anorexia had set for me NEEDED to be broken in order for me to recover. Now I have created new recovery rules that I make sure I follow everyday and these rules I intend to follow for the rest of my life.

The message I am trying to get through is that rules can be really good or really bad. While breaking all the rules my anorexia set for me was one of the best things I have ever done, I know that breaking my recovery rules would be a huge mistake. You need to be able to identify which rules you should or shouldnt break in life in order to be truly healthy and happy.

Sometimes it can be hard to identify which rules need to be broken, especially when our anorexia is strong. I suggest writing down the rule on a piece of paper and then re-reading it while you imagine it is about someone else you love. Something I have found is that my thoughts are much more rational when I am thinking about others then when I am considering myself. Also, If the rule is unhealthy or needs to broken, you will know deep down in your heart that this is the case.

Also, to determine whether a rule should be broken or not you can imagine yourself telling a person about the rule. If you would feel embarrassed or ashaimed about someone finding out about the rule, this is a good indication that you should try and break it. In my experience my anorexia hasnt wanted people to know about its rules as otherwise others would try to stop me from following them.

There is no real advice I can give you about actually breaking your anorexic rules as there is no easy way to do it. All you can do is stop following the rules and to not let your anorexia ever convince you to start following them again. Your anorexia will be extremely angry that you are no longer following its rules and I know its painful but you just need to stay strong and push through the pain. Try to remind yourself that this is just another essential step that you need to take in order for you to recover and that it does get easier. 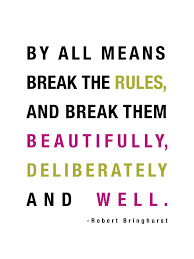